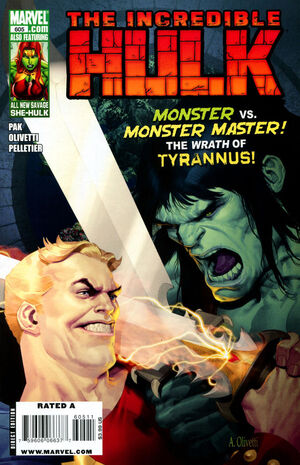 Appearing in "Banner and Son"Edit

Tyrannus returns! Manhattan crumbles! Moloids attack! And only Bruce Banner and the Son of Hulk can save the day! Unless, of course, Skaar decides to join the monsters...The first big storyline in the all-new "Incredible Hulk" comes to a senses-shattering climax as Bruce Banner discovers whether his take-your-savage-barbarian-son-to-work program has been a rousing success -- or the biggest disaster visited upon the Marvel Universe since "World War Hulk"! Plus: the All-New Savage She-Hulk's quest to find Jennifer Walters reaches its conclusion -- with a stunning twist!

In Badwater, CA, Lyra dodges Axon's electrical bolts, while asking Boudicca for tactical options. Unfortunately, her watch states that Axon is surrounded by a bioelectric field impenetrable to any strategy she can think of. Hearing this, Axon advises that Lyra listen. She demands Lyra's gamma sight, to help her fix her trouble mind, otherwise she'll kill everyone in town. Reluctantly, despite Boudicca's protests, Lyra concedes, believing that Jennifer Walters would do just that. Axon then quickly absorbs all of Lyra's gamma energy, turning her human while making herself electrically green. Getting back on her feet, Lyra urges the townspeople to run, for they can't trust a madwoman who killed her own family. This enrages Axon, who attacks, only for her anger to cause her weaken, which Lyra was counting on. Fighting back, she determines that Axon had post-traumatic stress disorder. As she recovers her powers, she is about to apprehend Axon when she spontaneously explodes. A Gamma Corps retrieval ship had remotely terminated her, as she had been seen, failed her mission and exceeded the elimination quotas; however, General Ryker is confident that they will have another opportunity.

The townspeople thank Lyra for saving them, believing that she killed Axon, but she denies it. When asked who she is, she replies that she's nobody.

Sometime later, Lyra has made it to the Gamma base in Death Valley but finds no evidence of Walters. However, Boudicca then detects someone. Next, an unseen voices offers a proposition for Lyra, someone she recognizes.

Retrieved from "https://heykidscomics.fandom.com/wiki/Incredible_Hulk_Vol_1_605?oldid=1769184"
Community content is available under CC-BY-SA unless otherwise noted.