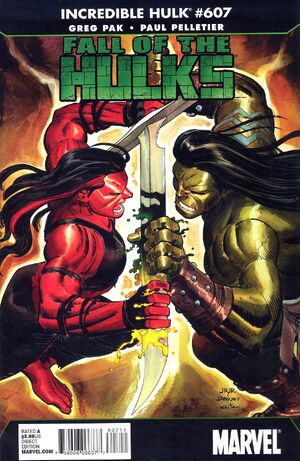 Appearing in "Man With a Plan"Edit

FALL OF THE HULKS Tie-In The mysterious Red She-Hulk takes on the Earth's Mightiest Heroes -- and only Banner and Son can save the day! But will they? The life of an Avenger hangs in the balance as Bruce Banner finally reveals his true alliances and objectives! Be there as the gamma-sized FALL OF THE HULKS continues with fan favorite Hulk-writer Greg Pak (PLANET HULK, WORLD WAR HULK) and spectacular penciler Paul Pelletier (WAR OF KINGS)! Plus, a backup feature continuing the first mission of Red She-Hulk!

Retrieved from "https://heykidscomics.fandom.com/wiki/Incredible_Hulk_Vol_1_607?oldid=1725406"
Community content is available under CC-BY-SA unless otherwise noted.