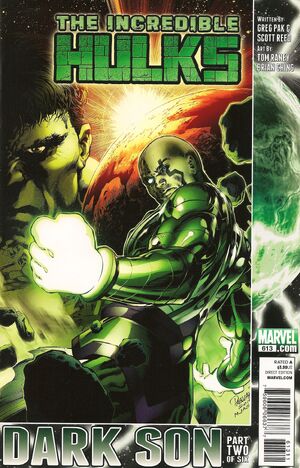 You want me to get into a shuttle. So you can shoot me into space.

The Worldmind of K'ai has had enough of Hiro-Kala's desire to rid the universe of the Old Power. It has Hiro-Kala relive his memories that started from Sakaar to K'ai. It then showed him memories of his father, the Hulk, taming K'ai with Jarella.

A face of Hiro-Kala then emerges from the ground, toppling the statue of the Hulk, before leaking tears that grow flora. But it was a trick, as Hiro-Kala brainwashes the people of K'ai into his slaves. He then elaborates on his plans to destroy another planet: Earth!

All of Earth's smartest geniuses notice that another planet has entered the Solar System.

Meanwhile, in Dry Tortugas, Florida, Skaar senses the approach of his brother, Hiro-Kala, through the Old Power. He rushes off to find his father, who is in the midst of battling against Betty, arguing over certain issues. But their battle endangers Skaar, who was caught in a tidal wave. Betty leaps to save him. Once they are all ashore, they are approached by Steve Rogers and Amadeus Cho. They explain about the approach of K'ai. Rogers brings down a shuttle, which he explains is for Hulk and his family to help them meet K'ai head on. Hulk presumes this to be a trick, but Cho asserts that he checked for any secret protocols to exile Hulk to space. Rogers tries reasoning with Hulk about the importance of friendship and family, but the response is Hulk smashing his shuttle. Skaar then confides in his father that he has a twin brother, another monster.

Retrieved from "https://heykidscomics.fandom.com/wiki/Incredible_Hulk_Vol_1_613?oldid=1491401"
Community content is available under CC-BY-SA unless otherwise noted.