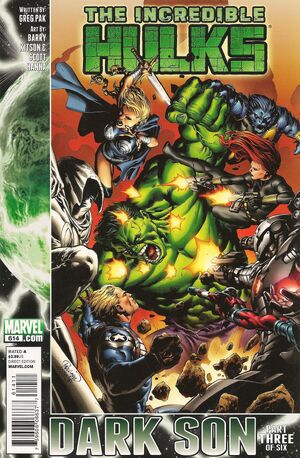 No. If you go up there, he'll kill you. Or you'd be forced to kill him. And then I'd kill you. You're staying right here with the rest of the little people, Rogers.

A young boy named Harvey is chasing his grandfather's pigeon, which flew off without a reason. He climbs over some rocks to find it hovering around Skaar. Due to birds being dependent on the planet's gravitational field, the pigeon felt an imbalance. Sitting behind Skaar is the Hulk, who advises Harvey to be quiet. Skaar uses the Old Power to sense the approach of his twin brother, Hiro-Kala. Harvey then rushes home to find his grandfather watching the news, detailing President Obama's promise that they will take out the approaching planet K'ai. However, Hiro-Kala shoots rocks from K'ai's surface that intercept the approaching missiles

The scene then cuts to the Hulk smashing his way through countless U.S. shuttles. The Secret Avengers respond to his appearance and manage to subdue him. But in reality, Hulk was prepared, as A-Bomb, She-Hulk, Red She-Hulk, and Korg leap up from the ground. Commander Steve Rogers attempts to talk to Hulk, warning him that his team have Starktech weapons ready to fire on them and send them to the Negative Zone if they don't stand down. Hulk then turns back into Banner, who still rejects Rogers' offer to join forces. Banner then goes on to explain about his second son, Hiro-Kala and the possibility that the outcome may involve having to kill him or he'll destroy everything. It is then that Skaar raises the Warbound's stone ship that they used for Hulk's war on Earth to allow the other Incredible Hulks to go and take the fight to K'ai , and to Hiro-Kala. Rogers is then on the line with President Obama, who acknowledges that they may have to rely on The Incredible Hulks for this one.

In Gamma Base in New Mexico, A-Bomb asks Banner as to why Skaar is with them. The answer is that they may need him. A-Bomb then suggests that he could probably stash him in a certain old vault. Flashing back to days earlier, Banner is showing Skaar his vault, a safehouse that was designed to hold the Hulk. But instead, Skaar locks him inside. Skaar insists that he'd be allowed to join the mission, citing the dangers he had faced before coming to Earth. Banner defends that he's trying to give him a better childhood than what his father gave him. Skaar then opens the vault, insisting that he comes with him, no matter what. In the present, Banner includes Skaar with the battle planning, promising to teach him how to play chess.

PLUS: the first two installments of the S.M.A.S.H. FILES, secret stories of the Incredible Hulks!

Retrieved from "https://heykidscomics.fandom.com/wiki/Incredible_Hulk_Vol_1_614?oldid=1406973"
Community content is available under CC-BY-SA unless otherwise noted.