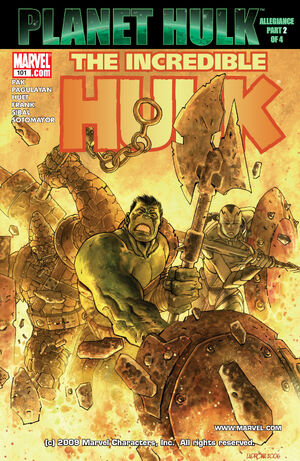 Hulk, Caiera and Hiroim are brought by the Shadow Elders to their lair, where they reason that because of Hulk's violent ways, he could not be the true Sakaarson, who will come to unite all races of Sakaar. Hulk doesn't care about their judgement and takes their ship to combat and defeat the Emperor's. When Hulk and his crew arrive at Crown City, Hulk pacts with the enemy, the Spikes (!) who decide to aid Jade Jaws in his fight against the Red Emperor.

Retrieved from "https://heykidscomics.fandom.com/wiki/Incredible_Hulk_Vol_2_101?oldid=1523903"
Community content is available under CC-BY-SA unless otherwise noted.