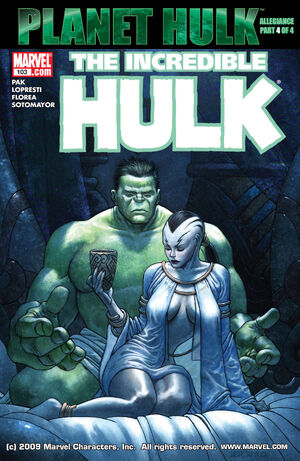 ...This fight is over. We are all Warbound now. Embrace your brothers. Or I'll kill you myself.

Weakened from feeding the Spike Fathers for seven straight hours, the Hulk turns into Bruce Banner (for a little while). The Spikes thank the Hulk for his energy and disperse through the city to feed the other Spikes so they don't have to feed on anyone else. Caiera did witness the Hulk becoming smaller but did not get to see Bruce's face. The Hulk emerges again and goes for a walk through the city with Caiera as people approach him with offers. Meanwhile, Elloe, Miek and their followers kill all of the remaining Red King forces and advance to the Senate. It's where Elloe's mother, a Senator, asks her daughter to stop. She explains the world rightfully belongs to the "pinkies", not the bugs. Elloe and Miek are about to fight to the death when the Hulk makes a brutal entrance and tells them to fight in the arena. Elloe, Miek and their groups start fighting but the Hulk enters the arena and asks them to fight him instead. Stabbed from both sides, the Hulk proclaims the war is over and asks pinkies and bugs to salute in peace, which they do. The Shadow Elders, witnessing all, are now convinced that the Hulk is the Sakaarson, the prophesied savior of Sakaar. With the Red King dead, the Shadow Elders reestablish the Shadow pact with the Hulk. In exchange for guaranteeing their lands and rights, the Hulk asks for a queen, and chooses Caiera. She accepts. During their private wedding ceremony, Caiera asks the Hulk to reveal all. So he turns into Bruce Banner. Caiera kisses Bruce who turns back into the Hulk. Later, they emerge from their room to a balcony so the people of Sakaar can see their new King with his Queen. The Hulk has found peace, but Miek isn't happy. He wants the Green Scar to continue smashing, and making his enemies pay. It's revealed that Miek and the Brood were lovers. By accident, they find the shuttle that brought the Hulk to Sakaar. After watching the farewell message that the Illuminati left for the Hulk, Miek conceives a plan.

Retrieved from "https://heykidscomics.fandom.com/wiki/Incredible_Hulk_Vol_2_103?oldid=1433171"
Community content is available under CC-BY-SA unless otherwise noted.