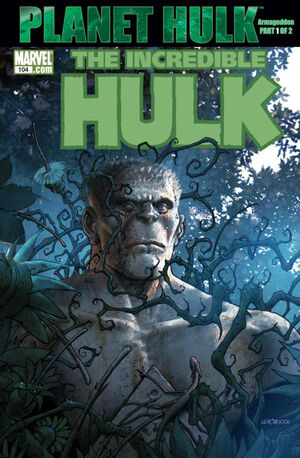 You always said you wanted to be left alone. May you finally find peace.

The Hulk and his empress Caiera Oldstrong lie asleep in bed. The Hulk is awakened by a message from Miek. He finds Miek who shows him a video display found aboard the ship that first brought him to Sakaar. The image on the screen is that of Reed Richards, explaining his actions, and apologizing for exiling the Hulk from Earth. Hulk grows angry and smashes the screen.

He then gathers Caiera and the two leap away towards the Steppes. Caiera shows him how the blood he has spilled has enriched the land. She also tells him that she is pregnant with his child The Hulk decides that he will bring peace to this war torn world.

The Hulk returns to the Crown City and begins delegating orders. He tells Hiroim and Korg to negotiate a treaty with the Fillians. He tells Arch-E-5912 to do the same with the Wildebots. Miek and Elloe are to attend him in working with the Spikes.

The Hulk helps the planet-bound Spikes board one of their ships. They rocket away from the planet, and stop at the Broken Moon where the Hulk gathers up more Spikes that were imprisoned during the reign of the Red King. Uniting all of the alien Spikes together, the Hulk brings them back to the stars where they belong.

The Hulk returns to Crown City to oversee more of the reconstruction. He finds a group of children playing on top of the S.H.I.E.L.D. shuttle that first brought him to Sakaar. An alert signal activates warning of a warp core breach. The Hulk, aware of the potential threat level, races to the ship, but he is too late. The shuttle explodes, and a wave of nuclear energy spreads across the planet, killing millions.

Retrieved from "https://heykidscomics.fandom.com/wiki/Incredible_Hulk_Vol_2_104?oldid=1433172"
Community content is available under CC-BY-SA unless otherwise noted.