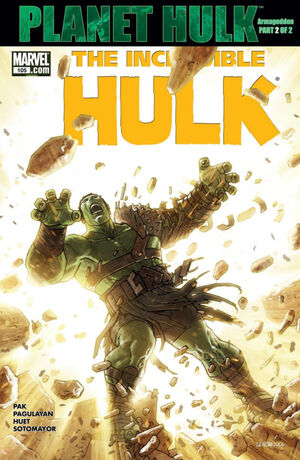 The people said I was the Sakaarson. Come to save them and unite them. But I was the World Breaker all along. I just didn't know you were too. Stupid humans, with your stupid shuttle. Can't you do anything right? I wanna die. I wanna burn into nothing. But with your bomb, you just made me stronger. The strongest one there is. The only one there is. Give-- them-- back! Give! Them! BACK! Give her back.

On day three of Hulk's reign as king of Sakaar, the shuttle he came in explodes, wiping out the entire planet, except for a few survivors. Hulk's wife, Caiera Oldstrong, dies in Hulk's arms. Hulk wants revenge, and is bound to get it... on Earth.

The end of Planet Hulk. The story continues in World War Hulk #1 and Incredible Hulk #106.

Retrieved from "https://heykidscomics.fandom.com/wiki/Incredible_Hulk_Vol_2_105?oldid=1433173"
Community content is available under CC-BY-SA unless otherwise noted.