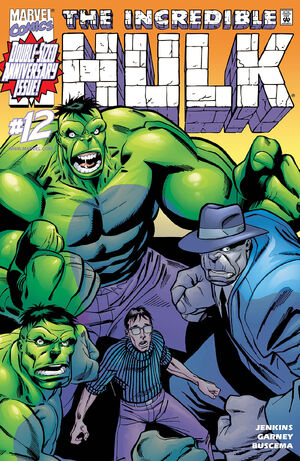 He's scared. And he ain't the only one either.... Not with what you've let loose in here. We all are.

Bruce Banner's (aka The Incredible Hulk) health is deteriorating. He seeks out his college sweetheart, Angela Lipscombe, for assistance. Their time together is detailed. Banner believes he has Amyotrophic Lateral Sclerosis (ALS) and Angela confirms it. Angela convinces Banner that he must make peace with the different personalities of his mind (the separate Hulk identities) and sets him up in a machine so he can enter his subconcious and confer with the Hulks. Upon entering his subconcious, Banner finds the Savage Hulk, who wants nothing to do with Banner and flees. He then finds Joe Fixit and the Professor chained to a tree and a monster closing in on the three of them. Joe tells Bruce it is a monster made of his own grief and loathing towards the world and Banner struggles to free the Professor to confront it.

Appearing in "Fast Lane Part 3: On the Edge"Edit

Synopsis for "Fast Lane Part 3: On the Edge"Edit

Retrieved from "https://heykidscomics.fandom.com/wiki/Incredible_Hulk_Vol_2_12?oldid=1433079"
Community content is available under CC-BY-SA unless otherwise noted.