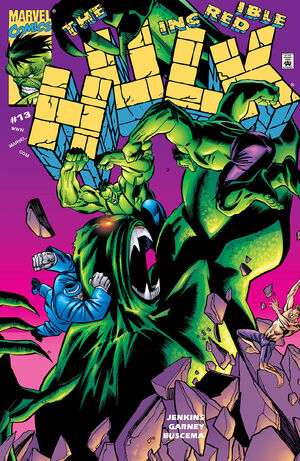 After making a deal with Joe Fixit about him and The Professor getting shared time after Banner dies, Banner frees Joe who fights with the large creature which ends up freeing the Professor as well. The two hulks then fight the creature whilst Banner discovers that there are thousands of hulks inside his mind and ends up having a conversation with the Devil Hulk. The Devil Hulk threatens Banner that one day he will be free and destroy Banner's life, Banner then runs out of the cave where all the hulks are imprisoned. Banner finds the Savage Hulk and persuades him to help the other two hulks fight the creature which he does and they successfully destroy it. Banner then wakes up from Angela's machine and they go for a drive.

Retrieved from "https://heykidscomics.fandom.com/wiki/Incredible_Hulk_Vol_2_13?oldid=1433080"
Community content is available under CC-BY-SA unless otherwise noted.