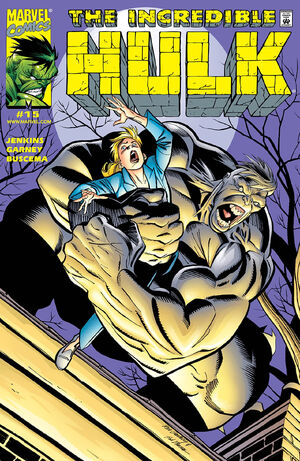 Appearing in "The Dogs of War: Part 2"Edit

Synopsis for "The Dogs of War: Part 2"Edit

General Ryker is observing some test subjects, who have been given doses of gamma radiation, when he is told that Bruce Banner has been spotted living with Angela Lipscombe. Ryker and a strike team go to Lipscombe's residence and, disguised as Jehovah's witnesses, Ryker and a agent speak to Lipscombe at her front door but she suspects foul play. Bruce recognizes Ryker's voice from a General present at the gamma bomb incident which unleashed the Hulk. Bruce transforms into Joe Fixit and after letting himself get captured to sneak a picture of Ryker, Joe and Angela escape Ryker and his men.

Retrieved from "https://heykidscomics.fandom.com/wiki/Incredible_Hulk_Vol_2_15?oldid=1433082"
Community content is available under CC-BY-SA unless otherwise noted.