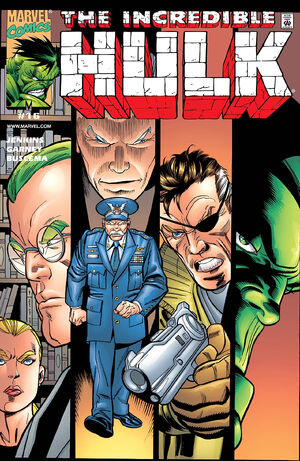 Appearing in "The Dogs of War, Part 3"Edit

Synopsis for "The Dogs of War, Part 3"Edit

Angela Lipscombe recaps her discovery of Bruce Banner's many dormant personalities to Leonard Samson. The pair then go to see Bruce who is currently in his 'Professor' persona and working on a device to mask his gamma signature from General Ryker's satellites. The Professor then walks out to 'visit an old friend' and after he leaves Angela confronts Doc Samson about the fact the Professor isn't actually Bruce's persona in charge of the Hulk's body. Samson shamefully admits that he created a personality that would resemble Bruce's personality but is in fact the man he wishes to be. Meanwhile, General Ross confronts Ryker about his recent actions but Ryker threatens Ross to co-operate with him or he will switch off his daughter's life support machine. In another location, the Professor visits Nick Fury who leads him to a guy named 'Hack'. Before departing, The Professor asks Nick if he can count on him when he will need him, Nick says he shouldn't count on anyone. Later, the Professor turns off his masking device, wanting Ryker to find him.

Retrieved from "https://heykidscomics.fandom.com/wiki/Incredible_Hulk_Vol_2_16?oldid=1433083"
Community content is available under CC-BY-SA unless otherwise noted.