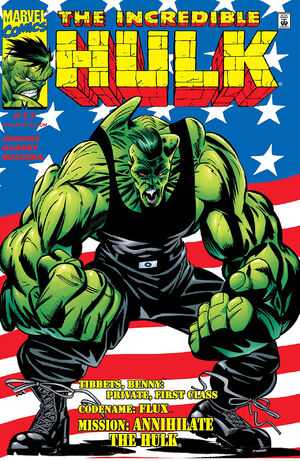 Appearing in "The Dogs of War, Part Four"Edit

Synopsis for "The Dogs of War, Part Four"Edit

Benjamin Tibbets is in a truck stop and turns into Flux after he gets too nervous talking to a girl. He then runs away, back to his army base to take his frustration out on a punching bad until General Ryker steps in and gives Flux the assignment to bring in the Hulk. Meanwhile, as he waits for Ryker's men to come to him, the Professor realizes that he is in fact not Bruce Banner's personality but another separate personality instead. At Doc Samson's home, Angela Lipscombe apologizes for her angry reaction to Samson's confession of creating 'the Professor' personality. Later on, Flux is parachuted to the Professor's position and the two start to fight, with Flux being angry for wrongly believing that Banner was the reason for his condition. After a brief confrontation, the Professor changes back into Banner, Flux changes back into Tibbets and they start to have a conversation about how Ryker has deceived Tibbets and Banner saying he can help the young soldier.

Retrieved from "https://heykidscomics.fandom.com/wiki/Incredible_Hulk_Vol_2_17?oldid=1433084"
Community content is available under CC-BY-SA unless otherwise noted.