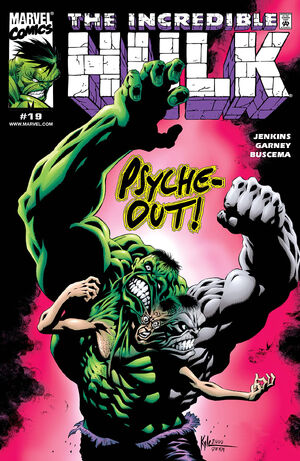 Appearing in "The Dogs of War, Part 6"Edit

Synopsis for "The Dogs of War, Part 6"Edit

General Ryker has the Professor, Leonard Samson, Angela Lipscombe and Flux all held in his base at Groom Lake. The Professor is held in bounds that pulse more energy into him the more he struggles, same as Flux. Leonard Samson and Angela Lipscombe are held in another room with each other. Ryker goes over Samson's notes about Tibbets and learns how to control him. He then proceeds to mentally torture Banner by making him relive his worst memories. Meanwhile, Nick Fury meets up with Hack who tells Nick that Banner asked if Nick could send a team in to break him and his allies out of the Groom Lake facility. Ryker then has a talk with his mysterious ally and reassures it that he is doing his best to help it. Inside Banner's mind, all the dormant personalities have managed to get free and Bruce, Joe Fixit and the Savage Hulk are trying their best to contain them, then the Devil Hulk appears. Ryker is then forcing different personalities of the Hulk to appear with General Ross observing who disapproves of the torture. Ryker then goes off to manipulate Flux by talking about his mother and Bruce asks Ross to help him.

Retrieved from "https://heykidscomics.fandom.com/wiki/Incredible_Hulk_Vol_2_19?oldid=1433086"
Community content is available under CC-BY-SA unless otherwise noted.