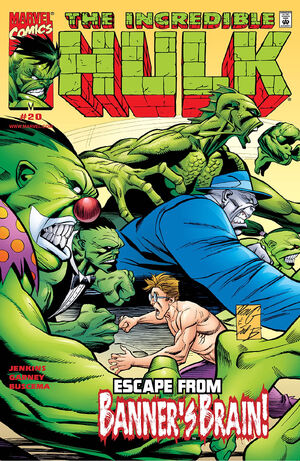 Appearing in "The Dogs of War, Part 7"Edit

Synopsis for "The Dogs of War, Part 7"Edit

All the personalities are running wild in Banner's head while the Professor still struggles against his energy bonds. General Ryker observes the video footage with General Ross before leaving to see Flux. Nick Fury and his men are outside the base preparing to storm it while Ross holds the people who see them on radar at gunpoint to stop them alerting Ryker. Just then, Fury's men crash into the base and Ross free's the Professor so he can meet up with Fury who has also freed Samson. However, Ryker and Flux (who is under the control of Ryker) arrive and Flux attacks the Professor. Ross and Samson find Lucy Ryker who has been subject to gamma exposure. Ryker continues to influence Flux to attack the Professor until Ryker see's that Lucy has been freed and so he evacuates the base. Flux turns back into Tibbets without Ryker controlling him and everyone meets up to talk about the situation. Ross lets everyone go saying he'll turn a blind eye to what just happened. A few days later the Professor is alone listening to the voices of the newly released Hulks inside his head and Banner is looking at the wreckage of the holding cell where the Devil Hulk was held.

Retrieved from "https://heykidscomics.fandom.com/wiki/Incredible_Hulk_Vol_2_20?oldid=1433087"
Community content is available under CC-BY-SA unless otherwise noted.