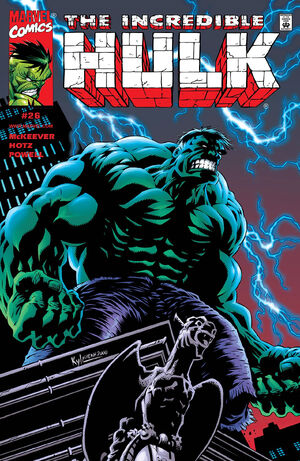 Appearing in "Do You Know Where You're Going?"Edit

Synopsis for "Do You Know Where You're Going?"Edit

The Incredible Hulk (seen as the Savage Hulk persona) wanders aimlessly through the countryside following his infamous battle with the Abomination. He looks to be suffering some sort of melancholy and thinks of finding a place of acceptance. His wanderings find him in the town of Wausau, Wisconsin. Meanwhile, Nadine and Simon are driving in a decrepit van, searching for a place to begin anew. They end up in Wausau as well. Simon is also known as the Killer Shrike, a super villain with the power to shoot flames from his wrists (with the assistance of wristbands).

The Killer Shrike robs a store and exits to find the Hulk in the street. He attacks the Hulk, who wants no part of the fight. During the battle, the Killer Shrike blasts a building to make it collapse on the Hulk. The Hulk emerges from the rubble unscathed and swats the Killer Shrike away from him, then leaps away. The building falls on Simon's van, killing Nadine. The Hulk ponders those he has loved and lost before entering a restless sleep.

Retrieved from "https://heykidscomics.fandom.com/wiki/Incredible_Hulk_Vol_2_26?oldid=1433093"
Community content is available under CC-BY-SA unless otherwise noted.