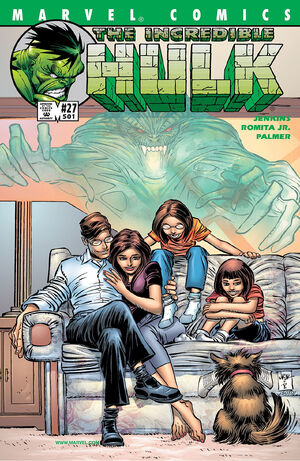 I keep seeing this green creature - a huge, great, muscled monstrosity that's just screaming and screaming with pain. I get the feeling... it's chasing after me, trying to kill me.

Bruce Banner leads the perfect life. He is married to his true love Betty Ross, with whom he has two twin children. He has a good relationship with his father, and has earned the respect of Betty's father, General "Thunderbolt" Ross. On his days off, he enjoys fishing with his dad, and playing golf with the General. Something is wrong though. Banner suffers from a recurring nightmare wherein he sees himself transforming into a large green monster. Betty thinks that his nightmares are just the by-product of work-related stress.

One night, Banner receives a telephone call from a mysterious stranger. The stranger tells him to meet him at the Crossroads motel. Banner does as instructed and hopes that this mysterious voice on the telephone might shed some light on his bizarre nightmares. When he meets up with the stranger, he finds that the man is a gray-skinned creature who introduces himself as his "old pal, Joe".

Retrieved from "https://heykidscomics.fandom.com/wiki/Incredible_Hulk_Vol_2_27?oldid=1433094"
Community content is available under CC-BY-SA unless otherwise noted.