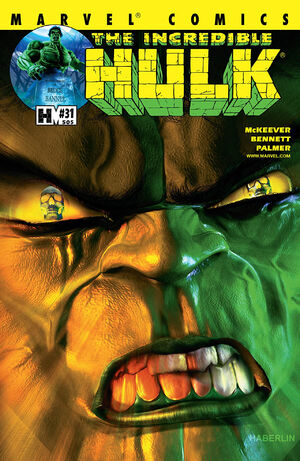 The Leader explains to Hulk how he managed to "survive" from his "death" back in their last encounter. On his "way" to death, the villain saw a vision most comforting, but was unable to join it. He used his brilliant mind to survive, building his body from dead animal and plant cells, but he wants to reach that light. He decided to call Bruce Banner and offer him a cure for his illness. Somehow, the Leader knows all about Banner's disease and his fractured psyche. Hulk knows that if he changes back to Banner, he may die. But the villain would only give the cure to Banner. It may be a trap, but if the Leader can cure Banner, he may revive Betty! Hulk puts on the helmet and turns back to Banner. The ill scientist falls helpless to the floor but starts to feel fine right away! On his feet and seemingly cured, Banner asks his nemesis why he saved his life. He wants Banner to witness how the Leader reaches heaven's doors. The villain also points a box to Banner where he can find all the information to cure himself. And as he grows larger, the Leader prepares himself for his last journey, however, he fails in his attempt to reach the light. His body explodes and the mine starts crumbling down. Banner turns into the Professor Hulk who grabs the box and comes out unharmed from under the tons of stone.

Retrieved from "https://heykidscomics.fandom.com/wiki/Incredible_Hulk_Vol_2_31?oldid=1433098"
Community content is available under CC-BY-SA unless otherwise noted.