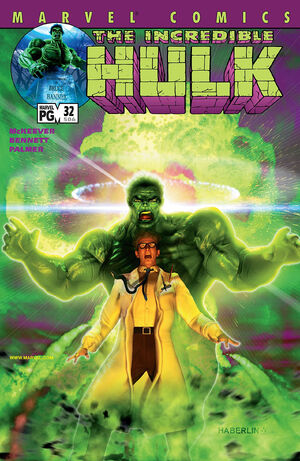 Hulk lends Reed Richards the documentation (a gift from the Leader to Hulk) that explains how to cure Banner from ALS. Reed Richards understands the docs and accepts to help Hulk. The Leader's cure theory is to replace two faulty genes from Banner's DNA structure, with good ones. Mr. Fantastic knows this task can be handled by Ant Man, who also accepts to help. In a lab at the Baxter Building, Ant Man reduces his size to enter Jade Jaws' blood stream. The task is not easy, but Ant Man eventually switches the genes. The operation is successful and Banner is cured from the fatal illness. But where does good genes came from? Brian Banner, Bruce's father. The person who was responsible for Bruce's horrendous childhood, never accepted him, called him a monster, and killed his mother, now saved him. A bitter sweet victory that paints Bruce's life with even more pain.

Retrieved from "https://heykidscomics.fandom.com/wiki/Incredible_Hulk_Vol_2_32?oldid=1433099"
Community content is available under CC-BY-SA unless otherwise noted.