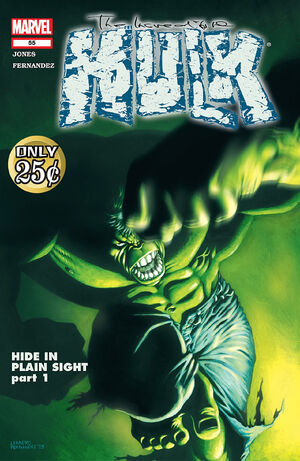 Appearing in "Hide In Plain Sight"Edit

Synopsis for "Hide In Plain Sight"Edit

Dr. David Zahn, the inventor of state of the art plasma beam prisons is in charge of incarcerating the Absorbing Man. Although Absorbing Man has been in prison for many months, he has not engaged in any physical activity. Instead, he has learned to transmit his power along alpha waves and absorb people's minds forcing them to do things they wouldn't normally do. He forces an employee named Judy Laughton to take her own life. Bruce Banner meets Judy's friend Pamela Grayson and begins manipulating her as well. The influenced Pam and Banner beat up a gang of thugs who try to rob them. This shows that once Absorbing Man taps into one mind, he can then extend his influence to anyone that said individual has contact with.

Retrieved from "https://heykidscomics.fandom.com/wiki/Incredible_Hulk_Vol_2_55?oldid=1433122"
Community content is available under CC-BY-SA unless otherwise noted.