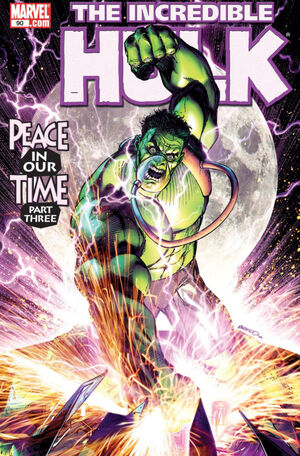 Banner may look like a reasonable, thinking man... but he's not.

Appearing in "Peace in Our Time Part Three"Edit

Synopsis for "Peace in Our Time Part Three"Edit

Godseye, a rogue SHIELD-constructed satellite that adapts, replicates and overcomes any and all technological attacks, successfully defends itself from the Hulk's attack by breaking his air mask, and making him a prisoner. Godseye feeds of the Gamma-generated power of the Hulk and prepares to fire upon Earth. The US President calls Nick Fury for a status report on the delicate situation. Meanwhile, Bruce Banner wakes up and explores the space station, finding only SHIELD agent corpses with wires coming out of their brains. Suddenly, terrifying sounds of steps approach Banner from behind; he turns and meets the humanlike manifestation of Godseye: a tall Cyclopean robot with a single green eye.

Retrieved from "https://heykidscomics.fandom.com/wiki/Incredible_Hulk_Vol_2_90?oldid=1486611"
Community content is available under CC-BY-SA unless otherwise noted.