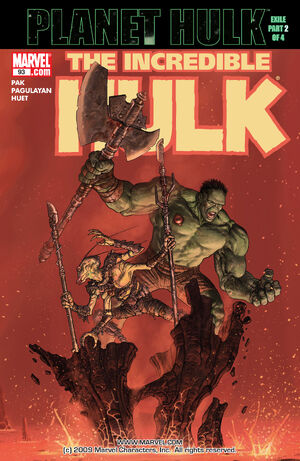 A group of anti-establishment rebels look on as Hulk and his insect friends, including Miek, fight it out in the Maw, hoping he is the answer to their prayers. After a vicious battle with some sort of lava creature in the Maw, the gladiator trainer tells Hulk and Co. that if they are successful fighters, they can win their freedom. They then are thrown into battle once more against a mixed group of rookie gladiators, four of them ultimately joining Hulk and his team as a third party attacks the two teams, the brood. As the battle ends and the dust settles the reaming seven warriors are formed into a team. The team consists of: Korg (an immensely strong rock-like creature similar to the Thing) Miek (the last remaining bug-like creature from the arena) Brood (the one of the creatures that attacked Hulk in the Maw) Lavin Skee (an ex-imperial guard) Elloe (the daughter of a recently deceased Regional Congress representative)and an Unbound Shadow(?) who refuses to talk. The next day the group face off against a team of lava/rock monsters that turn out to be Korg's brothers. After defeating them the group are faced by a team of Wildebots, whilst being observed by the residents of a hovering leisure cruise ship. Hulk takes them out in seconds and the group are treated to a luxurious feast, which is cut short when the group of rebels at the start of the issue, Sakaar Democratic Insurgency, blast their way in and ask the group to join them.

Retrieved from "https://heykidscomics.fandom.com/wiki/Incredible_Hulk_Vol_2_93?oldid=1523900"
Community content is available under CC-BY-SA unless otherwise noted.