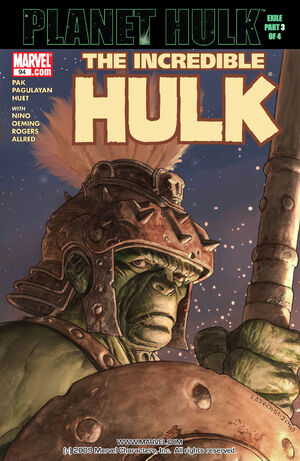 Following directly from Hulk #93 the rebel group ask Hulk and the group to join them to which the Hulk replies with a simple 'forget it'. Immediately after this rejection, Imperial Death's Heads storm in and disband the rebels, taking Elloe as she claims to be part of the rebels. Hulk and the rest of the group are ushered back below the deck of the cruiser where Hulk comes face to face with the Red Kings Lieutenant, she has been sent to buy him from his owner but Hulk refuses. The Red Kings motive for wanting Hulk becomes clear when the group enter the Great Arena and are attacked from above by a Deathfire Bomb, an act which was meant to kill them all, the Red King obviously wants Hulk dead. Death's Head Warguards then enter the arena to finish the job but have no more success than the bomb.After the battle the group are in their cell discussing stories of terror and how each situation has only made them stronger. The groups next foe is revealed as the lieutenant checks up on the silver fellow..

Retrieved from "https://heykidscomics.fandom.com/wiki/Incredible_Hulk_Vol_2_94?oldid=1523902"
Community content is available under CC-BY-SA unless otherwise noted.