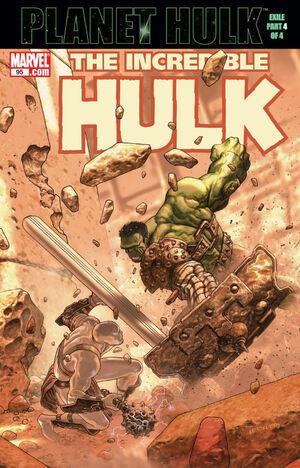 Weakened by the passage to Sakaar's dimension, the Silver Surfer was easily captured by the Emperor's troops and sealed with an obedience disk. Called the "Silver Savage", the Emperor's men think that he can defeat the Hulk, AKA the "Green Scar". The Surfer almost does. The Hulk and his crew are no match for the might of the cosmic traveler. Yet intelligence proves mightier than strength, and while reacting to an attack from above, the Hulk uses a weapon to break the obedience disk on the Surfer's chest. Free now from the Emperor's control, the Surfer stops fighting. But the Hulk's mad at his "friend" and slams him vigorously against the ground. The Surfer seemingly passes out. Caiera, the gray-skinned female Shadow Lieutenant, comes down to the arena to offer the Hulk and his group their new-won freedom. But since the Hulk slashed the Emperor's face, they trick him into believing that he needs to pass one final test. That test is to kill Elloe, former ally of the Hulk but now considered a traitor to the Empire. Refusing to do so, the group is penalized by activating their obedience disks which will eventually fry their brains. Recovered, the Silver Surfer uses the power cosmic to break all obedience disks, including those placed on all slaves and citizens in the vicinity. Really free at last, the Hulk and his Warbound group make their way through the walls of the Roman circus and escape the city. Far into the Twisted Woods, and followed by dozens of slaves and refugees, the Hulk and the Silver Surfer make peace. The Surfer invites the Hulk to return to Earth, but the Hulk refuses, saying that he's already home. Finally, slaves notice that a vine grew out of the Hulk's spilled blood, and believe that the Hulk is the prophesied Sakaarson: the planet's savior. However, could the Hulk really be the Worldbreaker, the one prophesied to destroy it...?

Retrieved from "https://heykidscomics.fandom.com/wiki/Incredible_Hulk_Vol_2_95?oldid=1503015"
Community content is available under CC-BY-SA unless otherwise noted.