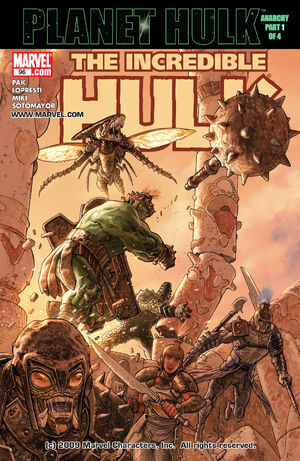 Caiera, the Shadow Lieutenant working for the Emperor, has a spy among those who followed the Hulk and his allies to the Twisted Wood. The spy's able to reveal the location of the Hulk, but he's soon discovered, and ends up perishing from a bombardment sent by the Emperor's forces. Hiding in the woods, the Hulk and crew outsmart Caiera's plans, and following Miek, they reach a small village commanded by Headman Charr. Miek reveals to the group that it was Charr who slaughtered his father and hive years before, and robbed his land. Miek wants revenge. To avoid a massive massacre, Charr proposes to Miek a one-to-one fight. Miek accepts and fells Charr. When Miek's about to strike the fatal blow, he forgives Charr and spares his life. Suddenly, screams are heard from under the ground. The Hulk opens a hole in the ground to find that Miek's surviving brothers have been kept as slaves by Charr! The Hulk and his group destroy Charr's village and depart before Caiera and her men arrive.

Retrieved from "https://heykidscomics.fandom.com/wiki/Incredible_Hulk_Vol_2_96?oldid=1517477"
Community content is available under CC-BY-SA unless otherwise noted.