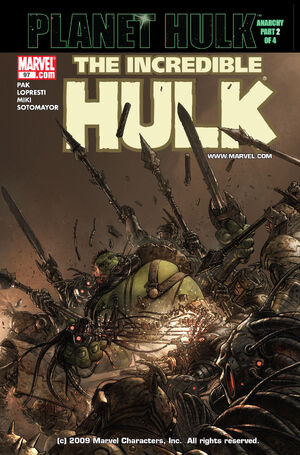 I know exactly what I am. And if you have any brains at all, you'll shut the hell up and let me walk away... before I kill your whole stupid planet.

Word of the Hulk freeing slaves reach Crown City. Slaves riot in the streets in the Hulk's name, who they think is the promised Sakaarson. The Emperor himself, in his mighty armor, dissolves the insurgents to dust with fire blasts. Meanwhile, the Hulk takes his Warbound, Miek's brothers, and many new followers to the Maw, in search of food and new fighters. At the Maw, the Hulk destroys the obedience disks controlled by Primus Vand, freeing all slaves including an enormous dinosaur beast which the Hulk uses as transportation. They move to the Steppes, an arid place where Emperor's men would not follow. But they find Governor Denebo and his men killing Miek's people. Though realizing it was a trap, the Hulk and his team charge. Suddenly, big explosions cause huge rock avalanches that can kill the rebels. The Hulk and Korg hold the heavy rocks, giving the others a chance to fight and defeat the Emperor's Army. It is now that Miek kills Charr. The Hulk, with a single powerful blow, hits the rocks which fall on top of many soldiers. Meanwhile, Caiera returns to Crown City to stop the rebellion. Seeing the Emperor killing "everything that moves", she uses the "Old Power" in her possession to cause an earthquake by hitting the ground with the palm of her hand (!). As the rebels calm down, Governor Denebo enters Crown City, alone. Denebo escaped from the Hulk and tells the Emperor that he believes the Hulk is the Sakaarson because, as the prophesy says, he is the one who can "hold mountains on his back". Furious, the Emperor pulverizes Denebo and asks Caiera to kill all pretenders to his throne. The Hulk decides to leave the Warbound. So Miek goes through a metamorphosis, turning into a large Native King, and demands that the Hulk stay.

Retrieved from "https://heykidscomics.fandom.com/wiki/Incredible_Hulk_Vol_2_97?oldid=1433165"
Community content is available under CC-BY-SA unless otherwise noted.