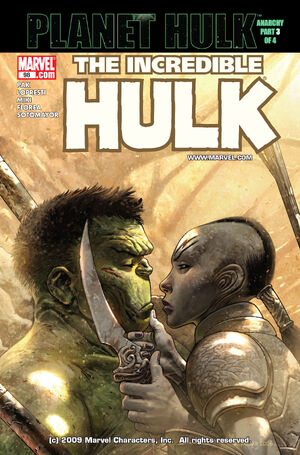 The Hulk is afraid that is if he does not stop his rampage, he will reach a point where he will not be able to control himself, and thus, become the Worldbreaker. But Miek and Elloe convince him to continue his fight against the Emperor. Korg and Hiroim stay with the refugees in the arid Steppes, where now the vines grow thanks to the Hulk's spilled blood. Caiera the Oldstrong finds the Hulk and confronts him. Using the Old Power, she hits the Hulk on the chest as the Hulk slams her. This causes an earthquake that is felt all the way to Crown City. Both contenders fall, wounded, but neither is dead. Fearing that the Hulk is alive, the Emperor sends a rocket full of Spikes. The Spikes, which were defeated by the Emperor's father, can infect anything that lives, transforming them into strong, fearing monsters. The Hulk and Caiera now stand together to confront the enemy.

Retrieved from "https://heykidscomics.fandom.com/wiki/Incredible_Hulk_Vol_2_98?oldid=1523901"
Community content is available under CC-BY-SA unless otherwise noted.