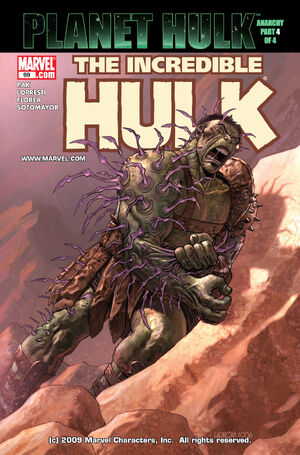 Caiera's squadron, infected by the Spikes, attacks the Hulk. Though he's not immune to the Spikes, the infection rate is very slow in him. This gives the Hulk time to pull the spores out or ask others to burn them with fire rifles. The Hulk and his Warbound reach a nearby walled city to fight off the Spikes from atop the fort walls, using fire rifles. In this city, Miek and his hive find the last surviving Native Queen slaved by the townspeople. Miek goes nuts and tries killing the villagers. Unfortunately, a Spike wounds the Queen. Burning his hand, the Hulk rescues her. At that moment, an Imperial ship approaches to film the fight and Korg and Hiroim arrive to help; Caiera helps too. But as she's evacuating one of the last civilians, a little frightened pink skinned kid, she learns from the Emperor himself that he released the Spikes to kill the Hulk. The Emperor gives orders to drop a fire bomb on the village. Caiera survives but the kid and the rest of the villagers don't. Realizing that the Empire is the true evil, Caiera joins the rebels in their fight against him. The Hulk, talking to the camera sent by the Emperor, says "Get ready, Red King, now we're coming for you."

Retrieved from "https://heykidscomics.fandom.com/wiki/Incredible_Hulk_Vol_2_99?oldid=1433167"
Community content is available under CC-BY-SA unless otherwise noted.