Part of the 'Asunder' story arc 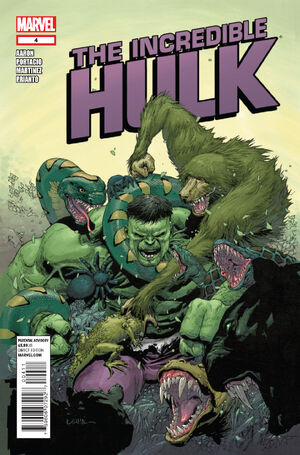 Appearing in "Hulk vs. Banner! Chapter One: Island of 1000 Hulks"Edit

Synopsis for "Hulk vs. Banner! Chapter One: Island of 1000 Hulks"Edit

Amanda von Doom warns Hulk that Bruce Banner has gone insane, having created an entire island of Hulked-out creatures. She also reminds that her squad hunts down mad scientists and implies that they put them down. She then adds that while she acknowledges that Banner was once a hero, just this morning he and his creatures broke into a military base in New Mexico and stole vials of gamma juice. It's only good for two things: building bombs and creating Hulks. Therefore, the Mad Squad had no choice but to kill him. The Hulk corrects: he's going to kill Banner. At that moment, they arrived on Banner's island. Then suddenly, they are attacked by all sorts of Hulked-out monsters.

Deep in the jungle, Banner has Hulked-out a bunch of tigermen. He then attempts to Hulk-out himself but it fails to work again. A hallucinating voice starts mocking him, calling him the real monster and he furiously attempts to transform.

Outside, Hulk fights his way through all the Hulked-out creatures before leaping off to confront Banner. Banner mockingly remarks that the last time, Hulk wanted to be left alone. Hulk accuses him of disturbing his peace. Banner confesses that his warthog Hulks attacked the underground of their own volition. He then comments on Hulk's appearance, saying that whoever separated them did a masterful job. Hulk takes note of the gamma bomb and tells Banner that he really has gone crazy. Banner derangely claims to be sane. Hulk then points out the other monsters. Banner admits that he didn't start out to create an army but to correct his mistake. Hulk warns that the Mad Squad has arrived to kill him. Banner asks what he wants; Hulk answers that it's obvious. Banner snaps, shouting that Hulk was never good at thinking. This provokes Hulk to grab him by the throat. He attempts to choke him but hesitates, so Banner uses an energy blast that ejects him from the lab. He then arms up, ordering his Hulked-Out monster to defend the bomb and he charges against the Hulk.

Retrieved from "https://heykidscomics.fandom.com/wiki/Incredible_Hulk_Vol_3_4?oldid=1728204"
Community content is available under CC-BY-SA unless otherwise noted.