Start a Wiki
Part of the 'Asunder' story arc 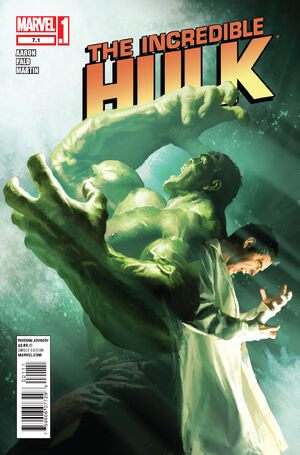 Three days from now, Red She-Hulk attacks the Hulk, demanding to know the fate of Bruce Banner. Hulk confirms he's dead and he was the one who killed him.

In the present, Hulk and Amanda von Doom are witness to dumping Banner's remains in a concrete coffin into the ocean. As the coffin sinks, Hulk suffers slight pain but claims he's fine. He then asks about Banner's island. Amanda states that they will wipe its location from all maps, but she's not going to take advantage of the beast man army Banner created.

Meanwhile, Doctor Dom has smuggled out five of the beasts off the island to conduct his own experiments.

Amanda then reveals that she made a new addition to her team by addition a monkey because he begged her and is so cute. She then asks Hulk as to his plans, whether he will return to underground or spend some "quality time" with her. Hulk then leaps away.

The Hulk proceeds to go off on his own, living in the wild, riding dinosaurs in the Savage Land, battle monsters, and discover treasure. Eventually, he ends up in a bar somewhere, buying a round of beers with his treasure. As he drinks away, he cannot help but wonder whether Banner is truly gone. Suddenly, he is attacked by Red She-Hulk.

As the two Hulks argue and fight, nearby, the Orb is committing a robbery. But he's not out for money, but for eyes, to the annoyance of his Orblings. As they rush out, the Orb takes notice the Hulks' fight and declares that he must have their eyes. They pay no attention to him until he fires on them and proceed to beat him up.

Hulk then asks Red She-Hulk if they should continue their fight. She denies, asking him to look her in the eye and tell her if he's sure Banner's dead. He may be dead physically, but what about mentally? They proceed to have sex, to the horror of the Orb.

Two hours later, as the Hulk enters a calm state, he transforms into Bruce Banner, elated to see that he's back.

• RED SHE-HULK knows, and is NONE TOO PLEASED.

Retrieved from "https://heykidscomics.fandom.com/wiki/Incredible_Hulk_Vol_3_7.1?oldid=1728207"
Community content is available under CC-BY-SA unless otherwise noted.