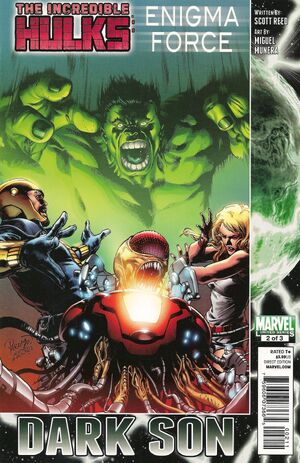 THE ENIGMA FORCE are not the heroes we thought they were. Trapped on the planet conquered by THE INCREDIBLE HULK’S DARK SON, HIRO-KALA, these re-united protectors of THE MICROVERSE find themselves outgunned, out of their element...and out of their minds! Commander Rann’s dark, secret past is unleashed in a battle that could re-spark an ancient war, changing Rann from the hero of the Microverse...into the executioner of Jarella’s World! ACT II of “INCREDIBLE HULKS: ENIGMA FORCE”

Retrieved from "https://heykidscomics.fandom.com/wiki/Incredible_Hulks:_Enigma_Force_Vol_1_2?oldid=1730783"
Community content is available under CC-BY-SA unless otherwise noted.