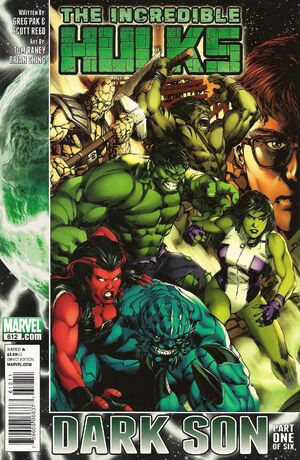 Think I expected anything different? We're all Hulks, now. You knew something was gonna get broken.

In the aftermath of the Leader's attempted coup, the Hulk family, composed of Skaar, Korg, A-Bomb, Hulk, She-Hulk, Savage She-Hulk, and Red She-Hulk have gone into seclusion, ignoring the attempts of the government to bring them out of hiding. Meanwhile Betty is having a hard time to cope with being cryogenically frozen, brainwashed, turned into a Hulk, being brainwashed, and ordered to murder her father and husband. Bruce walks up to her, preparing her wedding ring. However, Betty states that they are no longer married, since she was declared legally dead and everyone else knows that Bruce had married Caiera on Sakaar. He tries telling her that everything will be alright, working up to slipping the ring on her finger and telling her that he loves her, only to have her worked up and transform into Red She-Hulk.

Three minutes later and five miles away, Red She-Hulk goes jumping pass a police car. Bruce quickly jams his transmissions to prevent being discovered. Jennifer offers to go and talk to Betty, but Bruce insists to handle this on his own. He tries getting through to her, even though he had to dodge all the rubble she threw at him. Betty is intending on giving him the feeling of she felt all those years ago when the Hulk rampaged. Ultimately, he transforms into the Hulk. As soon as the others drive up, Betty leaps far away, taunting the Hulk into chasing her. Nearby, a frightened Skaar apologizes to his father. But the Hulk isn't concerned, knowing that in a Hulk family, something was bound to be broken, as he holds Betty's broken ring in his hand.

Hiro-Kala has used the Worldmind to heal the planet. The K'aians look to him for guidance, as he is the Son of Hulk, even though K'ai has no sun to speak of. From afar, dissidents attempt to convince Axeman Bone to take up arms against Hiro-Kala, but he argues that the Son of Hulk controls the ships that are pulling K'ai. But they don't listen to him and attempt to attack. Axeman Bone urges them to stop, for though Hiro-Kala is not the savior they want, he's the one they need. In response to this attack, Hiro-Kala summons the War-Mind to deal with them. He then heads to the K'aitian Worldmind. His powers are fading, which allows Axeman Bone to free himself from his chains easily. The K'aitan Worldmind reminds him that it's his own fault, for he is dragging K'ai into the freezing void. He could stop them if he turned things around or take back the Old Power. Hiro-Kala refuses, stating the Old Power must be destroyed. Confused, the Worldmind drags Hiro-Kala into his old memories from his stillborn, when he and his twin brother Skaar were both in the womb of their mother Caiera the Shadow Queen, guarded and warmed by she and their father, the Green Scar. When the ship that brought the Hulk to Sakaar exploded, the brothers were separated as their mother died. Alone, Hiro-Kala was found by a surviving priest, who marked him with the facial markings he bears today. But Hiro-Kala does not care about his memories, not what he has done to destroy the Old Power. He accesses the K'aitian Worldmind and begins to create lava pits to provide heat for his people. Then suddenly, the K'aitian Worldmind turns on him, using the War-Mind to pull him into the earth, as the K'aitian Worldmind has had enough of Hiro-Kala's unnecessary madness and chaos.

Retrieved from "https://heykidscomics.fandom.com/wiki/Incredible_Hulks_Vol_1_612?oldid=1433204"
Community content is available under CC-BY-SA unless otherwise noted.