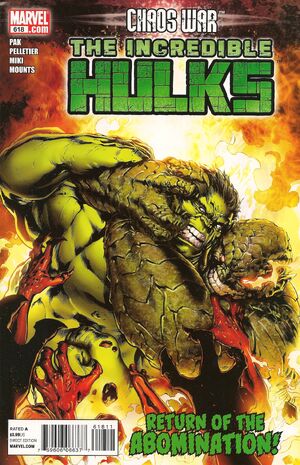 Bring out your dead -- and the Hulks will smash them! When the King of Chaos and Darkness unleashes his horrors upon Planet Earth, Doctor Strange calls on the strongest team there is to save life itself. A Chaos War tie-in featuring the return of the most horrifying Hulk villain in Hades -- and fan-favorite "Fall of the Hulks" and "World War Hulks" penciller Paul Pelletier! Plus an all-new backup showcasing one of Hulk's Allies!

Appearing in "How I Became the Bomb"Edit

Synopsis for "How I Became the Bomb"Edit

The Abomination was seen murdered by the Red Hulk in flashback as retaliation for the death of Betty.

The entity known as Zom merged with Doctor Strange during the events of World War Hulk after having his hands broken by the Hulk. Since then, Strange has kept Zom mentally suppressed until now.