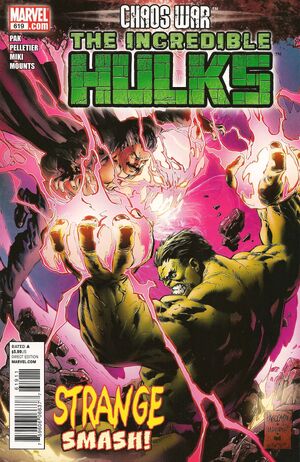 As the onslaught of the Chaos King threatens existence itself, a terrible secret from the past makes Marlo Chandler, Rick Jones's wife, the most important mortal on the planet. The Incredible Hulks race their most demonic enemies across the country to reach Marlo in time -- but can they handle the revelations she brings? Plus: the return of Doctor Strange's darkest side! Plus an all-new backup showcasing one Hulk's Allies!

Retrieved from "https://heykidscomics.fandom.com/wiki/Incredible_Hulks_Vol_1_619?oldid=1750080"
Community content is available under CC-BY-SA unless otherwise noted.