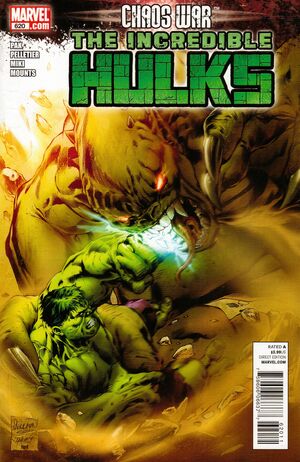 Great loves and horrifying enemies return in the battle royale for the souls of the Hulks -- and the life of every mortal on Planet Earth! The Hulk faces his darkest demons -- literally! -- all hell breaks loose -- literally! -- and there'll be the devil to pay -- literally! And if you thought the Hulk's battles with his sons were personal, you ain't seen nothing yet.

Retrieved from "https://heykidscomics.fandom.com/wiki/Incredible_Hulks_Vol_1_620?oldid=1655083"
Community content is available under CC-BY-SA unless otherwise noted.