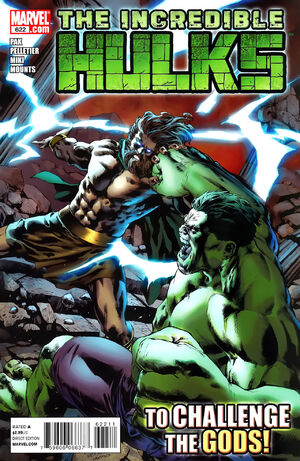 In the horrific tragedy of life sweepstakes, the Hulk has won the jackpot, time and time again. But now he's finally had enough. Don't miss the shocking climax of GOD SMASH as the Incredible Hulk breaks the most fundamental law set by the gods before mortals -- by demanding a reckoning from the most formidable Allfather of them all!

Retrieved from "https://heykidscomics.fandom.com/wiki/Incredible_Hulks_Vol_1_622?oldid=1726627"
Community content is available under CC-BY-SA unless otherwise noted.