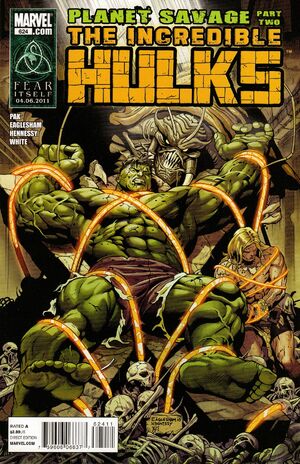 The old wounds of World War Hulk reopen as The Incredible Hulk confronts his wife's killer, and the Savage Land will tremble! In the slaughterhouse of Planet Sakaar's gladiatorial arenas, the Hulk and his Warbound companions swore to stand forever at each others' sides. Now, alongside Ka-Zar and Hulk's son Skaar, that oath faces its final test. Will their great bond end in rout or redemption?

Retrieved from "https://heykidscomics.fandom.com/wiki/Incredible_Hulks_Vol_1_624?oldid=1641122"
Community content is available under CC-BY-SA unless otherwise noted.