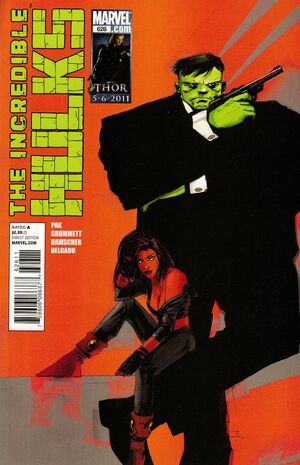 Appearing in "The Spy Who Smashed Me - Part One: When In Rome"Edit

MR. & MRS. HULK, Part 1 & 2 See the Hulk as you’ve never seen him before: as an international super-spy! With Amadeus Cho as his guide, Hulk dons a tuxedo and enters into a world of espionage, only to find his opponent is…Red She-Hulk? And what happens when Betty finds a new man? Hint: it doesn't really go over that well…especially when that man is one of the Hulk's oldest foes!

Retrieved from "https://heykidscomics.fandom.com/wiki/Incredible_Hulks_Vol_1_626?oldid=1641141"
Community content is available under CC-BY-SA unless otherwise noted.