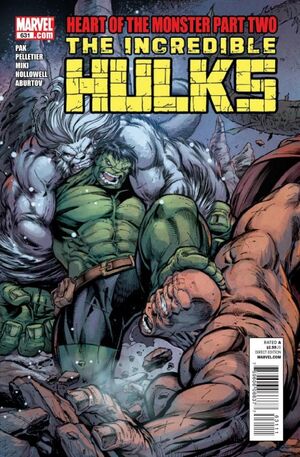 Appearing in "Heart of the Monster (Part Two)"Edit

"HEART OF THE MONSTER," Parts 1 & 2 (of 6) Planet Hulk" and "World War Hulk" writer Greg Pak ends his legendary "Incredible Hulk" run -- and he's taking the Green Goliath down with him! To protect his beloved family, Bruce Banner has spent the last year sacrificing himself in titanic clashes with monsters, demons, and the gods themselves. But what happens when the furious monster inside Bruce Banner says ENOUGH? Every wish comes true -- and every curse is unleashed -- as the angriest, strongest one there is finally seizes what HE wants. The Hulk's greatest love, most powerful villains, and ultimate triumph converge... in what just might be the end of the Incredible Hulk.

Retrieved from "https://heykidscomics.fandom.com/wiki/Incredible_Hulks_Vol_1_631?oldid=1641148"
Community content is available under CC-BY-SA unless otherwise noted.