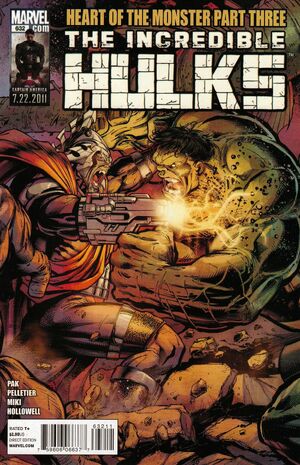 Appearing in "Heart of the Monster: Part 3"Edit

“Planet Hulk” and “World War Hulk” writer Greg Pak ends his legendary “Incredible Hulk” run with his most explosive, unpredictable and revelation-packed story to date! For the past year, Bruce Banner has fought gods and monsters to protect his family and everything he holds dear, but now he’s up against the toughest foe the angriest man on the planet has ever faced – his own shocking desires. When a genuine wishing well is unleashed upon the Marvel Universe, everyone’s true yearnings are fulfilled. But between what we think we want and what we truly desire may lie a terrifying chasm – made all the more dangerous by Umar of the Dark Dimension and Armageddon, Warlord of the Troyjan!

Retrieved from "https://heykidscomics.fandom.com/wiki/Incredible_Hulks_Vol_1_632?oldid=1641149"
Community content is available under CC-BY-SA unless otherwise noted.