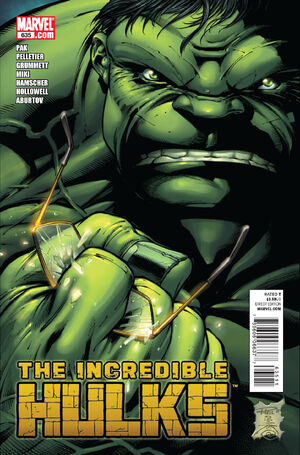 Appearing in "Heart of the Monster (Part 6)"Edit

"HEART OF THE MONSTER" CONCLUDES!

THIS IS IT! The finale of Marvel scribe extraordinaire Greg Pak’s heralded Hulk run, and he’s not leaving without a fight! Or in this case, an uncompromising beatdown unlike anything the Hulk has ever endured. All the stops have been pulled out and nothing is off the table in this crushingly climactic issue brought to life by acclaimed artist Paul Pelletier, a must-read event for any and all fans of the Green Goliath in this awesome, extra-large final issue!

Appearing in "Hulk Out (Heart of the Monster - Conclusion)"Edit

Synopsis for "Hulk Out (Heart of the Monster - Conclusion)"Edit

Numbering for this title began with Tales to Astonish #1 January, 1959

Retrieved from "https://heykidscomics.fandom.com/wiki/Incredible_Hulks_Vol_1_635?oldid=1726780"
Community content is available under CC-BY-SA unless otherwise noted.