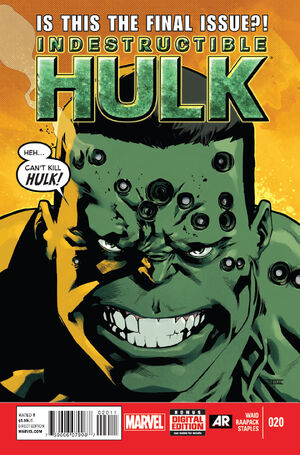 • BRUCE BANNER has had enough! He’s mad--and that’s not good!

• Banner blames MARIA HILL and S.H.I.E.L.D. for the tragic fate of his lab assistant and seeks revenge!

• There’s more than enough blame to go around, however--and Banner’s in the crosshairs of an assassin!

Retrieved from "https://heykidscomics.fandom.com/wiki/Indestructible_Hulk_Vol_1_20?oldid=1641509"
Community content is available under CC-BY-SA unless otherwise noted.