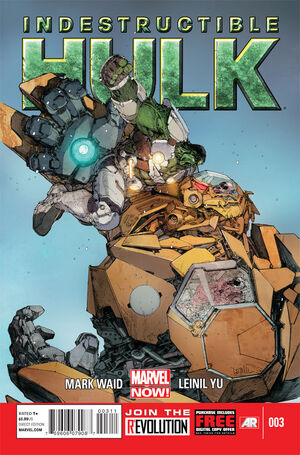 At SHIELD Headquarters, Director Maria Hill is interviewing the scientists that Bruce Banner has requested to work with him. The first person is Daman Veteri, a molecular engineer. After showing him a series of disturbing images of the Hulk in action, which he finds quite shocking. After that, she asks him why a highly sought out scientist would want to work in close quarters with Bruce Banner. Veteri explains that had Banner's career not been interrupted by the gamma bomb accident he wants to work with him now that he has rededicated himself to science. Next up is Randall Jessup an expert on renewable energies, who likens the chance to work with Bruce Banner as being on par with a violinist learning under Heifetz. Jessup isn't concerned about the Hulk, having lived a childhood with an alcoholic father he knows to run when there is trouble. THis is followed by an interview with Melinda Leucenstern, a climatologist/astrophysicist who has been incarcerated for criminal activities. Looking to go legit, she explains that she passed up working for Hydra or Egghead to take this job. Lastly, she interviews Patricia Wolman, a microneural biologist who is excited to meet with Bruce Banner. Hill tells her that Banner is not available because he is out on a mission.

Elsewhere, at a run down home, a man named Professor Burke is visited by men in black suits who have come to collect him. They place a helmet on his head to obscure his vision and attempt to take them out to their car. Before they can, a group of SHIELD agents storm the building. These kidnappers have advanced weapons that incapacitate the SHIELD operatives and they take the man they think is Professor Burke into their car, which converts to a flight mode and flies away. It takes their prisoner to Devil's Mouth, an island in the South Pacific. This island hides a research and development site for the terrorist organization known as Advanced Idea Mechanics. Their prisoner is taken to AIM's leader Colin Thirty-Three. However, they soon realize that they didn't grab Burke, but Bruce Banner in disguise. Once Banner reveals himself, he transforms into the Hulk and begins attacking the AIM operatives. At the same time, SHIELD operatives arrive on the scene to help take down this operation.

As SHIELD operatives take control of AIM's database, Colin Thirty-Three orders his men to carry on with their plan even without Professor Burke. As it turns out, Thirty-Three was attempting to reactivate the Quintronic Man robot. In order to accomplish this, he recovered the original pilots, all of them dead but Burke because they were linked to the device. Without Burke, Colin attempts operate the Quintronic Man and uses it to attack the Hulk. During the battle, Colin pushes the Hulk into the lava in the active volcano. However, the Hulk is able to withstand the heat and smashes the windshield on the Quintronic Man's head, flooding Colin's cockpit with molten lava, killing him instantly. With the robot destroyed and the AIM facility shut down, SHIELD extracts the Hulk from the scene of the battle. Back at SHIELD headquarters, Bruce Banner has returned to human form and is given medical treatment. As Maria Hill fills him in on what happened on the mission, she also tells him that the aides he request have all passed the interview process. However, she is concerned about Patricia Wolman, but Banner is aware that she is hiding something and assures her that he will be keeping an eye on her or the others. Maria then surprises Bruce by telling him that there will be a fifth member to his team. She then introduces him to a flying droid called a Recording Observation Bot, or R.O.B. for short. She explains that her superiors insist that it accompany Bruce at all times to make sure SHIELD is getting their money's worth out of him. Banner protests this, but Hill insists that it is necessary. However, when she leaves, Bruce turns into the Hulk and smashes the robot.

Retrieved from "https://heykidscomics.fandom.com/wiki/Indestructible_Hulk_Vol_1_3?oldid=1681548"
Community content is available under CC-BY-SA unless otherwise noted.