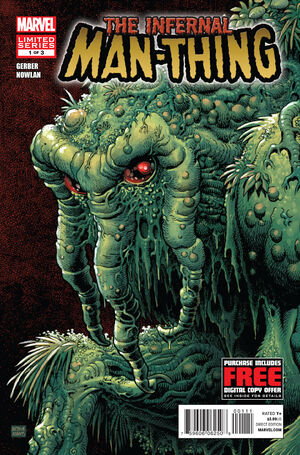 After finding himself unemployed by competing with "younger and cheaper" writers, Brian Lazarus returns to Man-Thing's swamp to finish his screenplay.

Brian Lazarus is tormented as he busily tries to write something with substance, he finds himself attacked by the spirits of people who want him to pay an unbalanced debt, resorting to violence to try and beat him out of it. His tormented emotions are picked up by the Man-Thing, that comes and rescues him. Each person he pulls off Lazarus turning into a wisp of immaterial smoke.

Afterward Lazarus wanders around until he is found by Sybil Mills, who has just been set up in a motel by Richard Rory waiting for her folks to pick her up from Miami. Taking Brian in, she too witnesses his mania with writing something with substance, and when the spirits appear to whip Brian once more, the Man-Thing appears again to help fight them off. They finally disappear when Sybil dispels Brian's assertion that he's a dead man, by treating him and calling him for what he really is: A living human being. With the danger past, the Man-Thing shambles off into the swamps once more.

• What is the mystery behind the “Screenplay of the Living Dead Man”? • The story no one thought existed!!! • NO ADS! BONUS CONTENT!

Retrieved from "https://heykidscomics.fandom.com/wiki/Infernal_Man-Thing_Vol_1_1?oldid=1435544"
Community content is available under CC-BY-SA unless otherwise noted.