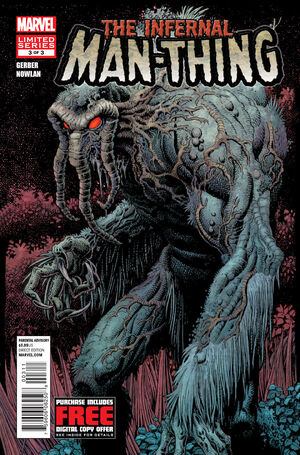 "Be a witness." Witness to what, Brian? The final disintegration of your mind? Why would anyone care to watch? Do you think you're unique? The only one life ever disappointed?

Appearing in "Like Lazarus Rising from the Swamp: Part Three"Edit

Synopsis for "Like Lazarus Rising from the Swamp: Part Three"Edit

Appearing in "The Origin of the Man-Thing"Edit

Synopsis for "The Origin of the Man-Thing"Edit

Dr. Theodore "Ted" Sallis is a scientist working on a variation of the lost super-soldier serum on behalf of a government contractor. He sets up shop in the Florida Everglades with his assistant (and lover), Ellen Brandt. What he doesn't realize though, is that Brandt is actually a spy working for a criminal organization. As soon as Sallis confirms the success of his super-soldier serum, Brandt contacts her people.

The thugs raid Sallis' lab and try to steal the formula from him. The only existing sample is contained within a needle. Ted grabs the sample and races out towards his car. The thugs begin following him. Driving away, Sallis realizes that the only way that he might survive (and preserve the formula) is to inject himself with it. If nothing else, he succeeds in keeping it out of criminal hands.

After injecting himself with the formula, Ted's car goes off a bridge and into the swamp. The super-soldier serum coursing through his bloodstream interfaces with the surrounding vegetation and transforms Sallis into a mindless, shambling muck-monster that men will come to call the Man-Thing!

The Man-Thing rises from the swamp and attacks the criminals. He grabs one and shatters his spine against his knee. Ellen Brandt is present and begins screaming. The Man-Thing discovers that he has an empathic connection to all humans, and fear produces a swelling of rage within him. He grabs Ellen by the face and secretes a corrosive substance from his pores, burning Ellen badly. Whatever knows fear... burns at the touch of the Man-Thing!

Retrieved from "https://heykidscomics.fandom.com/wiki/Infernal_Man-Thing_Vol_1_3?oldid=1435546"
Community content is available under CC-BY-SA unless otherwise noted.