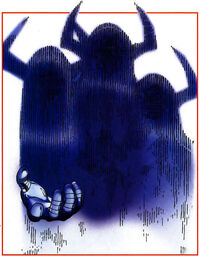 The Infinites were confronted by the Avengers and Eternity when they planned to destroy and rearrange the planets and stars of the Milky Way as a mean of making the flow of energy in the universe and multiverse more efficient.[2]

The Infinites are higher-dimensional entities infinitely transcending even Eternity, the embodiment of the Marvel Universe.[2]