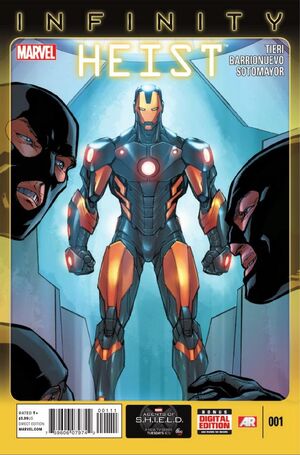 And it's times like this that don't make me feel so much like a so-called super villain... But instead more like a kid again. One that's waited all day for his parents to leave home so he can invite his buddies over a throw a party he's not supposed to. Of course, in this case... My parents are the Avengers.

Since the death of Iron Man's archenemy, the Mandarin, a year in the real world prior, Blizzard II has been seen robbing banks in a team-up with Whirlwind. While the Avengers take their leave away from Earth in order to fight the Builders, Spymaster approaches Blizzard II and Whirlwind who offered them to join up with him, Constrictor, Firebrand, Titanium Man, Unicorn I, and Whiplash IV in a plot to attack the almost-defenseless Stark Tower. However, this results in Blizzard's apparent death (when he suddenly collapses mid-battle) and the deaths of several Wakanda guards.

• As the Marvel U prepares for Thanos, Spymaster and some of Marvel’s best baddies decided where there is chaos – there is opportunity!

• It’s the crime of the century and an alien invasion is all the cover they need – so why is BLIZZARD having doubts?

Retrieved from "https://heykidscomics.fandom.com/wiki/Infinity:_Heist_Vol_1_1?oldid=1516650"
Community content is available under CC-BY-SA unless otherwise noted.