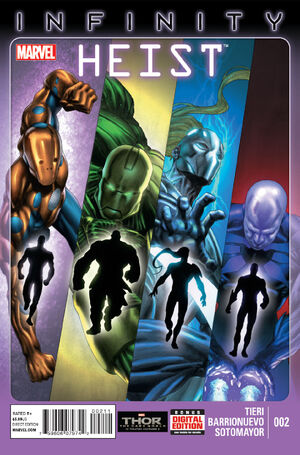 This is my chance. To maybe be part of something bigger for once. Something important for once. I have to take it.

Appearing in "The Heist - Part 2"Edit

Synopsis for "The Heist - Part 2"Edit

Blizzard manages to regain consciousness, and when he does so, he discovers that his skin has turned white and he can generate ice on his own. Blizzard had been exposed to the Terrigen Mists unleashed upon the face of the entire Earth by Black Bolt. Being secretly an Inhuman descendant, Blizzard suffered Terrigenesis which causes the manifestation of his latent powers. Blizzard thought that this was his opportunity to "be part of something bigger" and decided to leave Spymaster's team. However, he and Whirlwind were brutally attacked by Spymaster and Titanium Man when they tried to leave.

• Frank Tieri and Al Barrionuevo continue this trip to the dark side!

Retrieved from "https://heykidscomics.fandom.com/wiki/Infinity:_Heist_Vol_1_2?oldid=1457110"
Community content is available under CC-BY-SA unless otherwise noted.