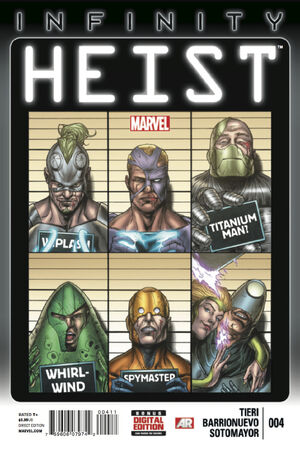 Actually, for the first time in a long, long time... Everything is just great.

Appearing in "The Heist: Part Four"Edit

Synopsis for "The Heist: Part Four"Edit

The group manages to escape custody and they start to fighting Spymaster, Titanium Man and the army of Iron Men (which were controlled by the first). The actual Iron Man arrived to the spaceship after having tracked down the armors, and even helps Blizzard and his allies defeat the enemies. During the fight, Blizzard uses the powers he discovered of being like a human battery to overcharge the armors and deactivate them, but he faints due to pressure and falls off the spaceship's cargo door. A suit Iron Man was controlling rescues him. But in order to let his friends escape, Blizzard freezes himself and the suit. Blizzard himself, meanwhile, is taken to S.H.I.E.L.D. custody and is left under the simulation he had been delivered to by the Inhumans in order to prove himself as the changed man Gill thought he was....until S.H.I.E.L.D. could know what to do with him.

Retrieved from "https://heykidscomics.fandom.com/wiki/Infinity:_Heist_Vol_1_4?oldid=1457114"
Community content is available under CC-BY-SA unless otherwise noted.