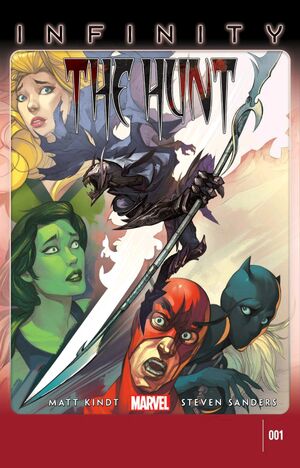 • Hank Pym, Wolverine, and She-Hulk bring the students of the Marvel Universe together to announce a new CONTEST OF CHAMPIONS!

• This CONTEST OF CHAMPIONS pits the super students of schools all over the Marvel U (including some you’ve never seen before) against each other.

• However, the Contest is interrupted when Thanos’ forces descend on Earth. What do they have to do with the young heroes?

Retrieved from "https://heykidscomics.fandom.com/wiki/Infinity:_The_Hunt_Vol_1_1?oldid=1647293"
Community content is available under CC-BY-SA unless otherwise noted.